IED Firenze usually proposes to its students to carry out a thesis project in collaboration with companies that turn to the institute in search of ideas to enrich and innovate their communication or the design of their services and spaces.

For our PTP master in Web Design, the 2018 proposal came from Adidas.

In an introductory brief (via videoconference from Nuremberg), some of Adidas marketing managers summarized the characteristics of the target audience, the storytelling behind the current campaigns, the activities undertaken so far, and the main objectives of the upcoming communication initiatives.

We students have been entrusted with the task of developing an innovative proposal that could be integrated into their strategy.

Adidas communication campaigns aim at Creators: young people of the so-called Generation Z with the desire to express themselves, participate, modify, create their own uniqueness.

Their first goal is to involve, propose an entertainment or shopping experience that increases the sense of belonging to the Adidas community.

They are also looking for proposals aimed at reducing the gap between the experience in the physical store and online communication, also in contrast to the dominance of the anonymous and all-encompassing purchase of Amazon.

Together with my teammates (Lorenzo Cini, Davide De Bartolomeo and Michele Martelli), after a phase of analysis, brainstorming and documentation, we decided to opt for an unusual project …

We found our main inspiration in a web project: The Johnny Cash Project.
In this online portal (now replaced by a presentation, since the project is finished), visitors could customize individual frames of the video of Ain’t No Grave by Johnny Cash, redrawing them and creating a collective work in constant motion.

This concept of providing a tool and allowing the public to express themselves by modifying a pre-existing media seemed to us in line with the concept of hacking and creation carried out by Adidas.

We wanted to ensure that Adidas, which has already experimented with customization projects for its products, would propose a hacking experience for a brand communication video, integrated with social networks.

The idea of Adidas Video Hacking is to create a web portal where you can customize the individual frames of a promotional video, giving life to the collective work.

But this wasn’t enough for us … we wanted our experience to be usable in-store, in an even more engaging way, so we decided to add a physical interface to the portal.

Graffiti artists are the hackers of urban space

In the store, an installation consisting of a panel and a fake spray can (actually an infrared pointer) will allow those present to customize the video frames as if it were a wall on which to draw graffiti.

The portal will be similar in everything to the one accessible online, but with a dedicated interface, to put the user in the mood of urban hacking, together with Adidas!

From the pitch to the prototype

During the pitch of the project, Adidas marketing and research and development managers were very interested in our idea! They asked us to create a representative prototype of the user experience and to highlight any potential issues, proposing solutions.

The first step was the development of the software to create custom frames and generate the video from them.

We designed and then implemented a simple and direct interface, which would allow the user to try their hand at creation immediately. Some of the design choices arose from the need to make the process intuitive, others to circumvent technological limitations and optimize performance.

Satisfied with the result, we moved on to the next step: the creation of the “spray can” cursor system.

After experimenting with remote controls, lasers, webcams and various types of projectors, we settled on the necessary components and got everything we needed.

Driven by the desire to demonstrate our idea (and by the concern that something would go wrong), in full do-it-yourself attitude, we built an installation that wasn’t pretty to look at, but worked wonders!

After the last adjustments, calibrations and required tests, we were ready for the grand finale!

Presentation of the project

We exhibited the project to Adidas marketing and research and development managers, taking care to explain the initial analysis phase and to present the study and work that gave shape to the prototype.

Here is the example video we brought: taken from Adidas promotional materials and edited through the app by me and the other members of the group.

The moment of greatest pride (and apprehension) was when, as expected, we proposed to our interlocutors to try the installation firsthand.

It was a success! We have been able to communicate all aspects clearly, propose further developments and we have received compliments for being able to provide a complete prototype, delivering on our initial intent. 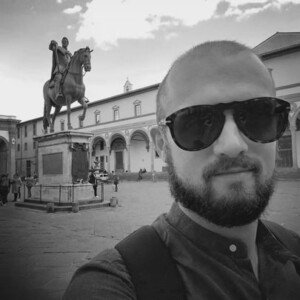